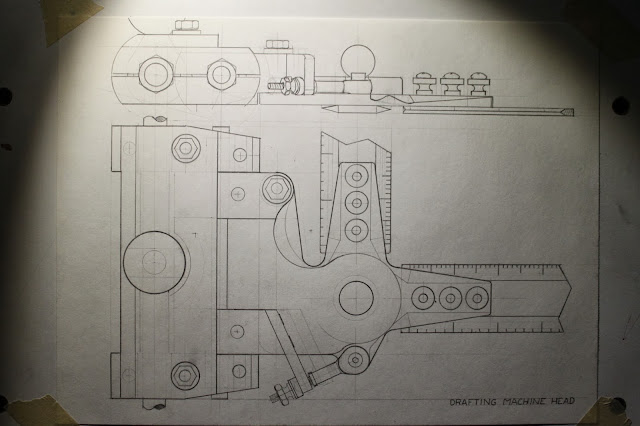 The idea is to put the scales on, hold the square to them and snug them up. Then the rules can be adjusted for parallelism with the axes with a reference point on the board and the thumbscrew on the bottom. The hinge part allows work up to about 1cm thick. I keep imagining using a dial indicator to true the rules, but some things you don't want to know. I'll probably just tape a stick to the board.

There's a little screw on the bottom (I forgot to draw in) which will make sure the rules aren't canted up off the board by the weight of the hinge. I worry that it might want to catch or drag on the paper, so I will put masking tape over it if I have to. See, tape is already a theme and I haven't even built it yet.

The parallelism adjustment thumb screw is sitting in spherical washers. So I can sleep at night.

There are two stainless ball knobs. The big one on the left locks the Y axis; the small one on the right locks the parallelism. I don't think there will be a lock for the X axis, since it will be sticky enough as-is.

I can feel the late hours filing already... two A.M., the awkward space in the notch by the top is looking back at me, and I'm wishing I would have used 303 instead of 304 stainless.

Update: "Machinable" 304 SS, what I used, isn't half bad. It does seem to work harden a little bit, but it only got in the way of the jeweler's saw. Stick wax lubricant helped with the hacksaw. Sawing 1/4" plate is not typical jeweler's saw work anyway.
Posted by aerialcopper at 10:14 PM