This is it. I rode a few cross races in Bellingham, WA (hometown) on it before it became a commuter: my primary, often only, mode of transport. Besides my feet. The fork, frame, and seatpost are the only original remaining parts. For a while it had bullhorn handlebars, a red chainring, and 23c tires. This required a messenger bag, which is fine in the Northwest. 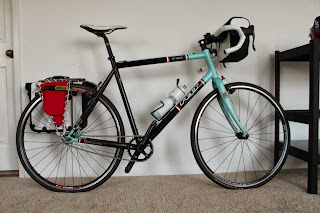 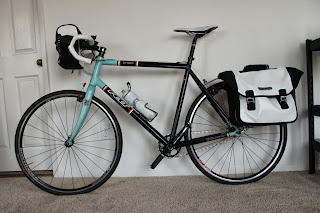 I moved to Southern California, and the heat made the messenger bag annoying. The handlebar bag came a year and a half before the rear rack. It's an Ortlieb Ultimate 5 classic M. They have a new version that seems even better engineered, which is hard to imagine. I used to keep the lock, cable, and the misc. in the handlebar bag, but it was a little too much weight for the mounting bracket. It slipped down over time. The weight doesn't really adversely affect the handling of the bike though, from a commuting perspective. It feels like a different bike without it though. 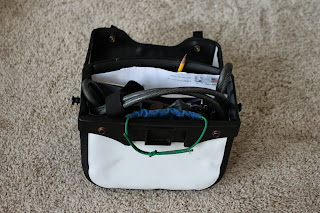 Below is the repurposed lock holder. It now holds whatever I want to be able to grab while I'm riding. The first one I made of canvas was pretty dilapidated after a year, so its replacement was made of doubled-up cordura stitched until the awl wouldn't stitch any more. More zig-zag on the cord. 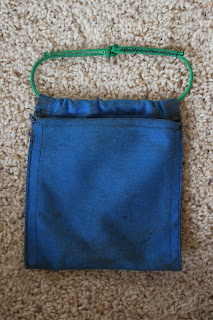 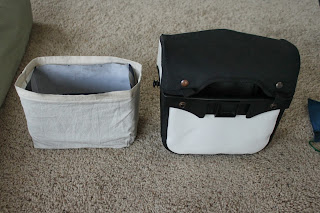 I made a muslin liner for it because I was tired of cleaning up all the flotsam that accumulated at the bottom. So the liner doesn't become one with the flotsam at the bottom, I added a cardstock frame. 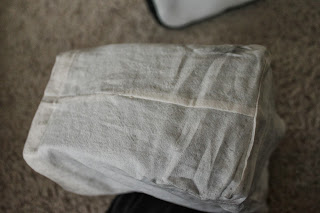 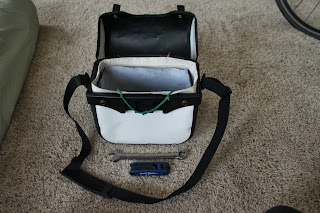 This is the Ortlieb Downtown Commuter pannier. The people at Ortlieb don't mess around, but what else is new? I've also had two Chrome bags, a backpack and the aforementioned messenger bag. Ortlieb and Chrome approach the same problem in two very different ways. They both have their places. The Chrome backpack has had my back covered (hoo hoo) a few times when I've gone to get building supplies. It has carried big sheets of cardboard, small boards, scraps of metal, and many other things I wouldn't/couldn't put in the pannier.

Below it is shown open. It can hold a lot this way in a pinch. The volume seems to be nearly cut in half when it's closed, which is still enough for a helmet and a pair of shoes. For a grocery run, it often falls short on space though. Chrome backpack and cool weather to the rescue, hopefully. 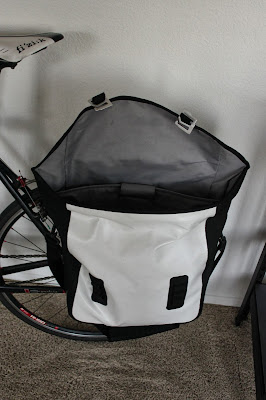 The bike didn't come with any rack mounting eyelets. The Tubus axle adapter was going to be expensive, and I wouldn't even get to use the QR axle it came with since the hub is bolt-on. So, I replaced the hub bolts with stainless threaded studs. Onto the threaded studs went shortened coupling nuts that I filed to length and perfectly square. On the outboard/unoccupied end of the coupling nuts went threaded inserts that brought the M8 thread down to an M5. The fancy little legs were hand-sawn and filed of 303 stainless. The spacer washers are unmodified (thanks, McMaster). I really like the look of the button head bolts; they're evocative of little metal bubbles.

Posted by aerialcopper at 4:09 PM