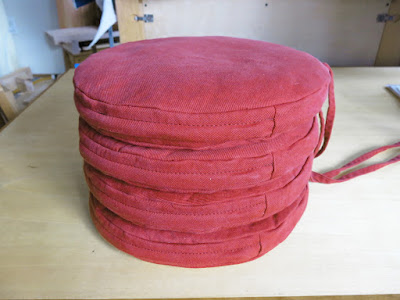 I made these denim cushions for two rocking chairs that my dad made. The ones with ribbons get tied to the backs of the chairs, the other ones just rest on the seat. Being round, it took a bit of caution to get the top and bottom plates to align well. I divided them all into eight equal segments and kept the segments synchronized as I sewed. The ribbons also had to line up. As I do not have an overlock machine, I used grosgrain as bias tape around the edges on the inside. The cushions are just stuffed with a few layers of polyester batting.

Due to uh, manufacturing complexities, the maker tags have not been put on yet. I think I'll go put them on now- 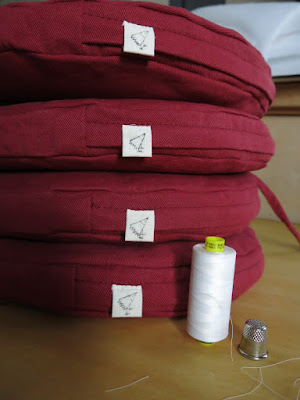 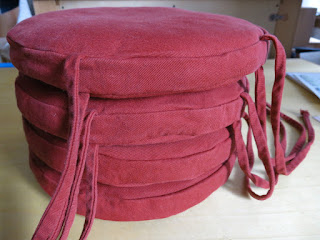 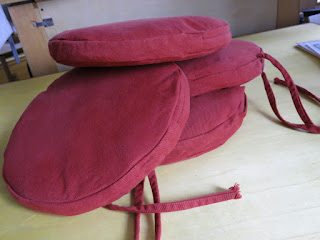 The colors may look a little odd; the camera increases the contrast and makes red into violet. I edited them a little and they still look funny. 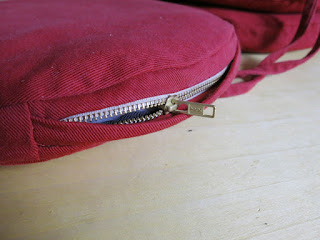 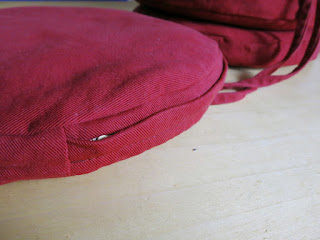 Took a picture of myself sewing the tags on. If you are wondering who writes this blog, this photo captures me pretty well. I make 98% of the things I do in this 4m x 4m space. 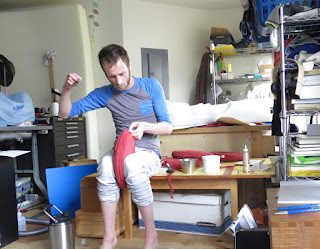 After these I'm making a full set of cushions and window blinds for a Catalina 27' sailboat! You can see the foam in the back left of the photo above.
Posted by aerialcopper at 1:47 PM No comments: 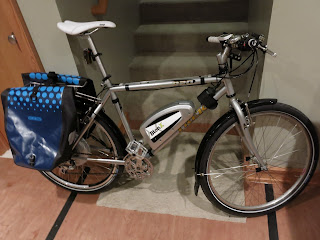 I put together this electric bike about a year ago. At the time, I lived on a mountain about seven miles from downtown. I didn't have the energy to bike into town often, and I seldom rode in the car: I had no driver's license, and I am somewhat sensitive to the dirty/dusty interior of cars. As a result, I usually stayed within a mile or two from home and was somewhat isolated from the usual 21st century bustle.

So I decided to get my driver's license, with the intention of riding around a 49cc scooter. The scooter would make it much easier to get in and out of town. I took the written exam to get my permit. I started to practice driving a car for essentially the first time in my life, and I didn't enjoy it at all. I understand this is a common experience for people who don't start driving until they are older.

To boot, a car was not my vehicle of teenage liberation as it is for many people. I found freedom when I was about 12 on my sister's ruby-colored 650b road bike, which was a spritely little sled: 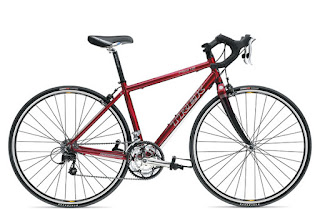 There were many other reasons the idea of getting around on a scooter became sour, but eventually: 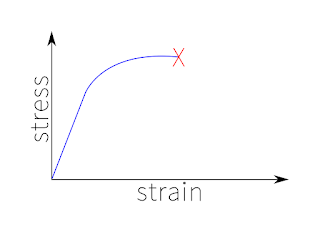 I saw the guts of this bike on craigslist for $100. My dad bought the Bionx conversion a few years prior for his Catrike, which was sitting unused in the garage. The rack, lights, and panniers were just sitting around too. 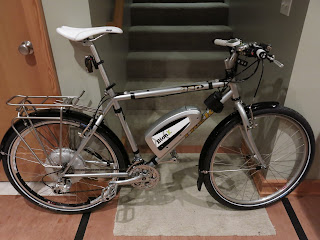 While nowhere near as powerful as a scooter, it was powerful enough to enable me to get into town a couple times a week. I basically haven't touched the car or the scooter since that bike was built. I could carry anything I wanted on it, my extremities didn't get numb in the cold, I wasn't legally required to wear a massive helmet which fogged up constantly, and best of all I could easily afford it!

A year passed, and I moved to the downtown area with my girlfriend. She, who also doesn't have a car, needed to get to school and work every day. My transportation needs were greatly reduced at this point since I now basically lived at my destinations. I let her borrow the electric bike a few times, but after about two weeks it was gone all the time. I had just built a bike for myself, too: 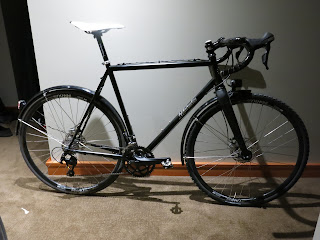 I didn't expect to be riding it a whole lot, but I did. The generator lighting has been really nice. It's a fast bike though, and I began to miss the electric bike for carrying my tools and grocery getting.

So I built myself a new one! It was somewhat complex. I had to machine an axle torque arm for the front, and many parts required modification. Here it is carrying my tools to fix some kitchen equipment: 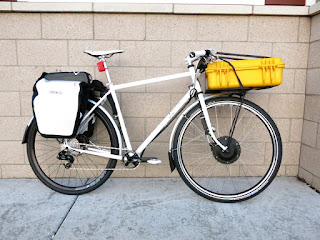 It has an Ezee geared front hub, Ezee controller, Hailong DT battery, and f/r lights powered by the main battery. I got all the ebike parts from Grin Tech (www.ebikes.ca), who have incredible customer service. 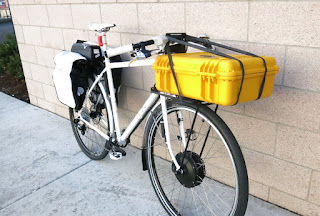 The front hub motor and rear-mounted battery make it much more balanced than the bionx bike. It also actually fits my spindly self. Below you can see the wooden adapter I made to mount the battery atop the rear rack (see below). 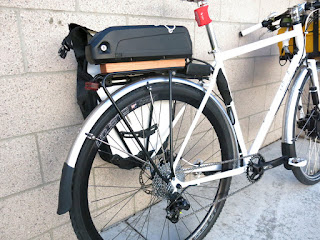 I really like the handlebars. The sweeping bars and fork gave it a flying-ace aesthetic to me, so I put a snoopy sticker on the battery. 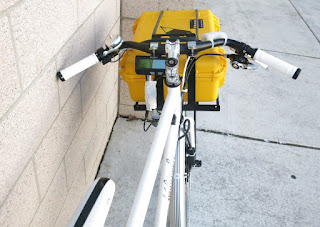 Here is the rack adapter made of hard maple. I made a similar part not long ago using a table saw and drill press in a proper shop, whereas this part I made quietly in my apartment mostly using hand tools. I used the taig lathe to mill the slots. I think the method was symbolic of the bike: practical, steady, quiet, and affordable. 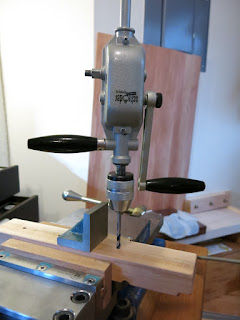 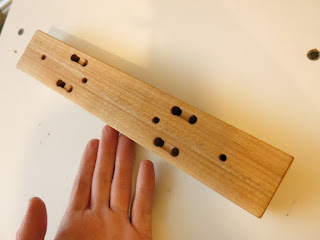 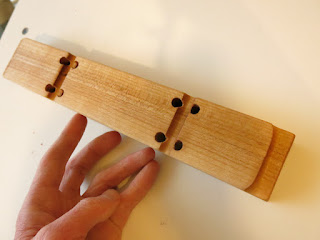 Posted by aerialcopper at 8:54 PM No comments: 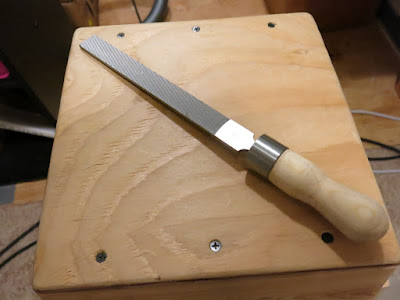 From the video description:

Paul Sellers did a video about making a chisel handle here: https://youtu.be/xocuzBlViEo

The way he drills the hole in the handle after he turns seems sort of wishy-washy. He is also relying on the shape of a cordless drill for the axial alignment of a hole. It's definitely accurate enough, but the method has no elegance!

I bodged together a lathe with a schroeder breast drill, an awl, and some clamps to try a different method. I first drilled a hole in an octagonal chunk of wood, then pressed a slightly larger drill bit into the hole to act as a mandrel. I held onto the bit with the drill chuck (could just as well use any drill), and spun it to visually find the center of the non-supported end. I stuck the awl in the end to act as a center, and turned it using a chisel.

The handle is made of recycled wood and the ferrule is made of a scrap of bicycle steerer tube. I cut the ferrule with a hacksaw blade while mounted on the lathe, to show you do not need a 800kg lathe to turn (tough) steel. A hacksaw blade can also be used for turning like this: https://youtu.be/17D_Jglr4Q0?t=2m1s

I think a faceted wooden handle is nicer to hold and easier to make by hand, but this works for parts which need to be more accurate. 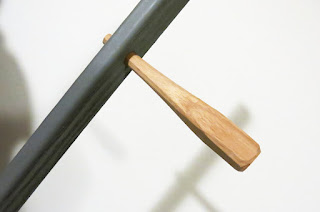 This is a rod I hang my clothes on to dry. The original rod was hickory, which started growing mold(?), so I began searching for a replacement. I found this stick of plastic decking in a pile of construction waste and it followed me home. I felt like a knight with a lance, carrying the 6' stick on my bike. The original was clamped to the closet doors, which was ugly and kept two clamps occupied. I whittled these pins out of hickory to keep the rod in place. 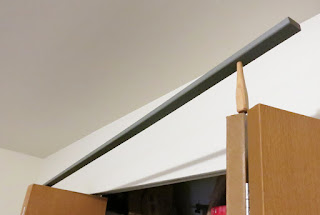 Posted by aerialcopper at 4:51 PM No comments: 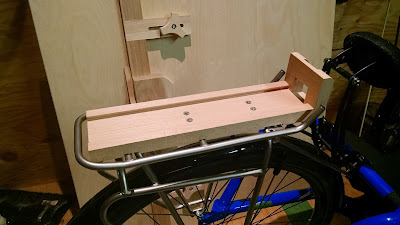 Topeak makes a pannier/rack-top bag with a dovetail mount. It fits their racks, but not the Tubus rack my dad had on his Catrike. I made him this wooden adapter with a dovetail, which accepts the Topeak bag.

Here are the wooden clips which hold it to the rack: 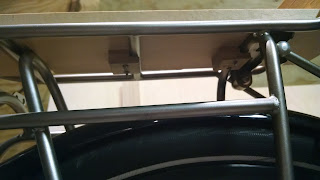 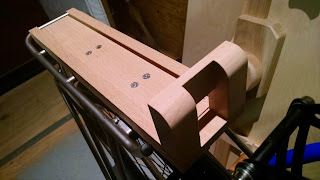 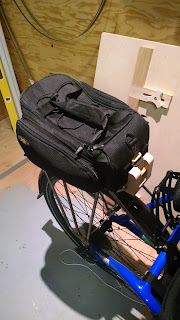 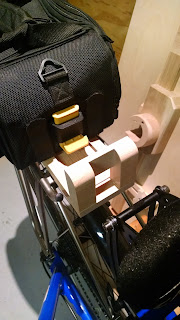 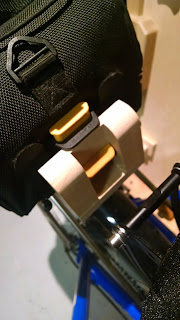 Posted by aerialcopper at 12:18 AM No comments: