I have wanted a frame saw something awful bad for a few years, to use for sawing metal. I think I was blessed (or cursed?) at birth to spend my life hacksawing. It's not as bad as people make it out to be; it's a very accurate tool. Accuracy at the saw is worth a pound of cure at the mill, or often in my case, the hand file. It's not difficult to saw +/- .010", and +/- .004" is not out of the question when all my ducks are in a row.

No matter how it's done, sawing steel is kind of a pain in the butt. Be it metal grit in your collar (glowing hot or just hot enough to burn), a mighty physical workout, or funky old coolant that dearly wants to find a way back to the earth, no method is without its drawbacks. I once bought and restored a little power hacksaw, but it was even slower than hacksawing by hand--I think due to the short stroke, wide kerf, and its lack of deductive reasoning ability. Who am I to blame though?

I once nearly bought an Ellis horizontal band saw, but kept the money instead--my favorite saws for metal are dedicated vertical bandsaws. They are relatively peaceful and versatile.

A couple months ago I found the saw design of Blackburn Tools, which struck me as especially pretty--I just sort of memorized the general form and sketched it out on the wood I had. The wood came from the ReStore, I think it might be alder. I got the idea for the pins from Sean Hellman. The whole thing, including making the three blades, took a full day of work and maybe $20 in materials. 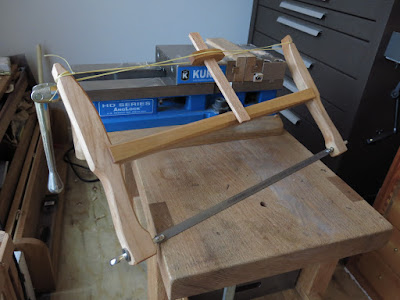 I had put it off for a long time because I thought I didn't have the technology for drilling holes in the hardened blade. I really worked it up in my mind that it was a difficult undertaking. Yesterday I took an $8.50 diamond 'stone' to a $2.60 carbide tipped masonry bit to sharpen it. It drilled so easily and quickly, I felt like an idiot for putting it off so long. To cut the blade, I just clamped it in the vise and bent it back and forth. 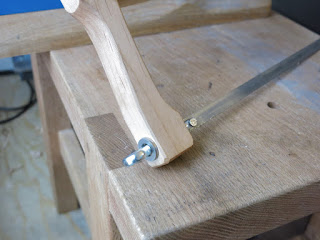 The whole thing feels absurdly light to me. I used Kevlar thread for the tensioning string. Like a spoked wheel, it's such an elegant design. 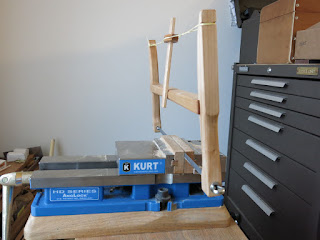 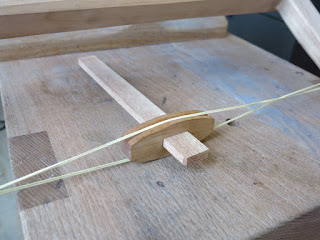 Below is the hacksaw it mostly replaces. I finally snapped yesterday while using it because the thick coating of paint on the blade was making the blade steer unpredictably. It also squeals! Whether the blade is loose or tight, wax-lubed or bone-dry, pressed hard or gently, it really can get loud. I work mostly in a shared apartment, and do my best to keep the people around me happy. I often pressed the pinky of my leading hand against the blade to quiet it down, which feels a bit risky; fortunately I haven't slipped yet. I have even clamped large rubber dampers to the frame and blade, which reduces the noise at expense of stroke length. Which brings my to my last gripe, the short stroke! I am a tall and lanky machine, I feel like I'm pedaling a children's bike with a 12" hacksaw. 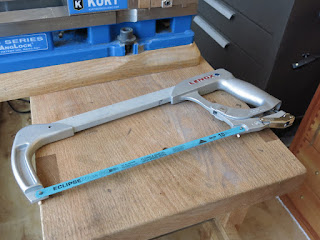 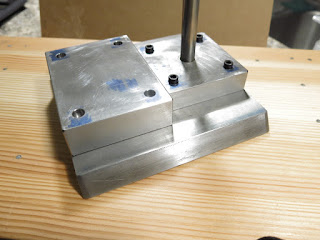 Today I put ol' faithful head-to-head with the saw I just made. I tested it on these blanks for odd-sized t-slot-nuts, .25" x .75" 1018 steel. I also tested it against my powered jigsaw at its lowest speed (I'm in an apartment, remember). 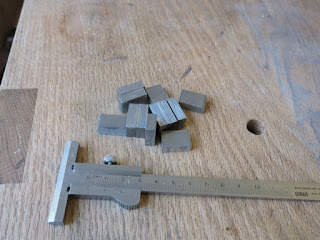 The slow speeds represent accurate cuts at comfortable pace. The fast speeds represent breaking-a-sweat speed with less attention to accuracy. All new blades, which might actually be a handicap to the hacksaw due to the idiot at the factory that paints them with ten coats of truck bed liner. The jigsaw, while fastest, was not nearly as accurate. All the pieces were within a .015" window in length :) 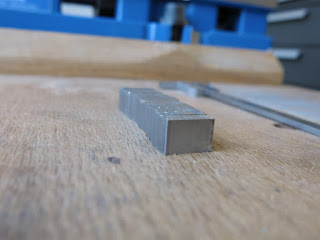 The frame saw is also quieter than the other two. I can't bear to put the blade in my hacksaw backwards, but the frame saw is quieter and more confident cutting on the pull stroke. I think once I get comfortable with it, I'll be ready to race the 2500 lb hyd-mech bandsaw at the tech school* ;)

I look forward to trying other blade types in it. The blades I made for it are 14 tpi modified-raker set, and it's clear that vibration was the biggest thing holding it back. I wonder if wavy-set or variable pitch blades would cut better. In any case, the Starrett bandsaw blade stock feels a lot sharper and more precise than any hacksaw blade I've used.