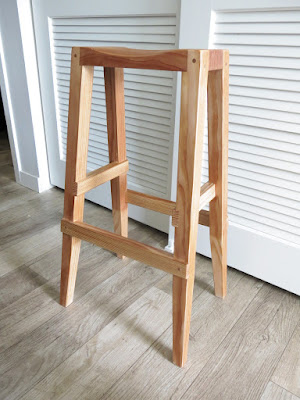 Finished this bar stool after carrying around the pieces for two years. The main pieces were ripped on the bandsaw, but otherwise it was pretty much made on potato power. Douglas fir is so ornery to work with hand tools, in the sneakiest ways. It probably would have been more precise and faster to make in another wood, but I like the character of the finished chair. Not afraid to scratch it- 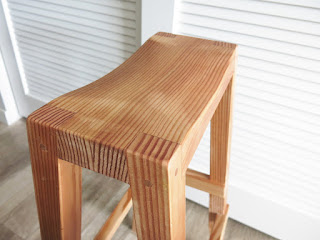 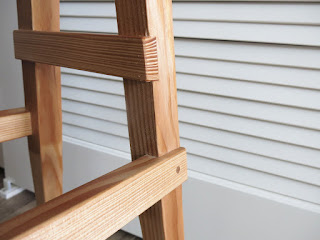 The side stretchers are recycled stilts I made for my girlfriend. She didn't use them and gave me permission to cut 'em up. 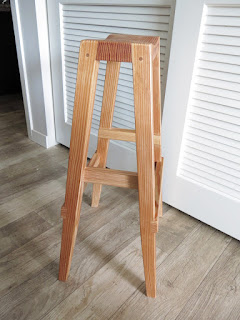 This chair is now sitting beside another chair which has a lot in common with it: made of douglas fir, a one-off design made by the seat of the pants, both made in free time. They share some interesting differences though- 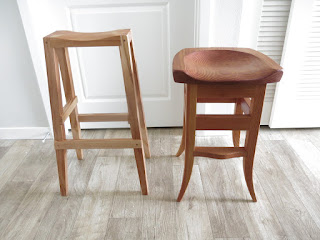 The one on the right was made by my dad almost entirely with power tools. The legs were bandsawn of 4x4's, the seat was carved with an angle grinder and bandsaw, and it is jointed with mortise-and-tenons done with mortising machine/table saw. It was finished with a random orbital sander and rasps. 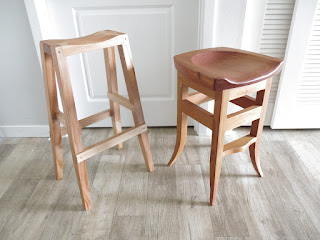 The one on the left was made in a 4' square space, using various hand saws and planes. The top was carved with a hatchet, and it is jointed with cherry dowels I cut and turned by hand. It was finished with rasps and a little bit of sanding. I think the designs reflect the tools they were made with; each would be a pain in the ass to make with the other method.

The one I made is less comfortable and has a rougher finish, but is lighter and used probably a 20% of the wood as the other one. It is equally comfortable to sit on frontwards/backwards. The one dad made is better suited to a wider range of butts, but feels weird to sit on backwards. Being a stool, it does get sat on in all directions. It's worth pointing out that dad has made much nicer stools since- 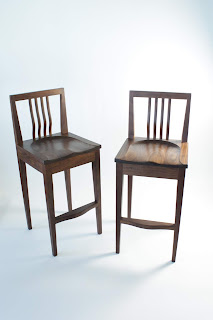 One more stool of interest! I made this one on the floor of a carport (where dad later built his shop) right after I moved to Bellingham. The wood came from a dumpster next door where my neighbors were building their house; it's also made of douglas fir. I used an awful hand saw, a block plane, a jigsaw, and a drill. Still, it has been a lovely stool! It's very rigid and has been sat on by many a butt in the four years it's been around. 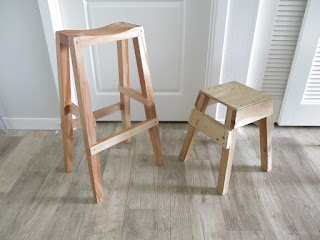 Posted by aerialcopper at 3:53 PM