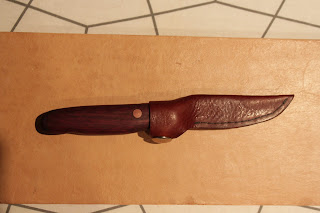 My brother's friend made a nice knife for himself, and he paid me to sharpen it. It was without a sheath so I made him one. 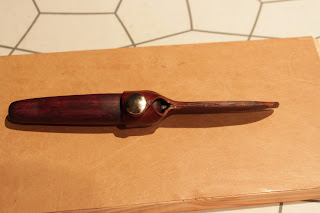 It initially had something like a convex grind. The edge was really blunt and just sharpening wouldn't have helped much. I decided to give it a Scandinavian grind. My coarsest stone is 6" long and 320 grit... it suffices to say we know each other well now, and a larger coarser stone is on its way. :')

Let me sharpen your things! 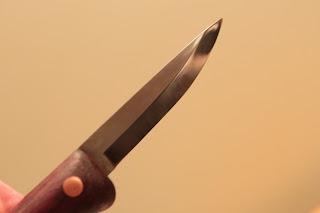 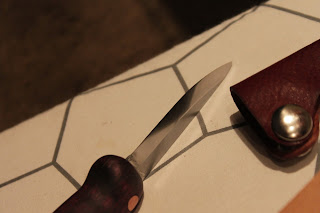 Tissue paper catching, but not quite hair-whittling sharp. 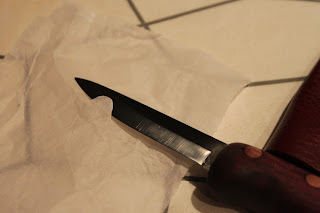 Made some strops with other leather scraps. I think the quality of leather is responsible for the scratches in the above picture. Or maybe it's because I didn't buy the electron-theory stropping aether. Maybe as business picks up... 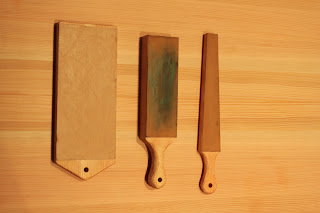 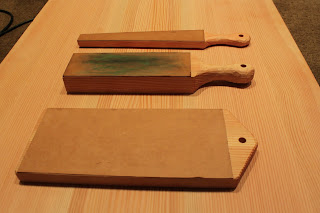 I also sharpened this axe for the knifemaker. I tried to repair the sheath, which according to my brother, had gotten between the axe and a tree in the middle of the night.

The (saddle) stitches are just shy of the blade, buried in leather. I think they stand a chance.

Something nice and wooden will be posted next week.
Posted by aerialcopper at 2:16 AM