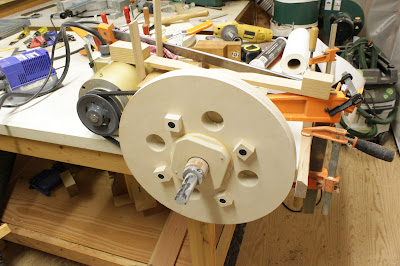 I've been slowly working on building a wooden bandsaw for the last eight months. It's based on the plans by Matthias Wandel. Instead of building it to save the cost of a commercially available bandsaw, we are building it to have a really nice and powerful machine.

Here were the rough douglas fir pieces for the frame: 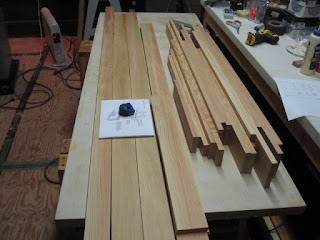 Matthias said his frame was under 30 lbs. Apparently the douglas fir is denser than the spruce he used since ours was definitely not under 30 lbs. Closer to 50 lbs. This is not a portable machine; I think it will end up at around double the weight of his, and definitely heavier than our cast iron one. 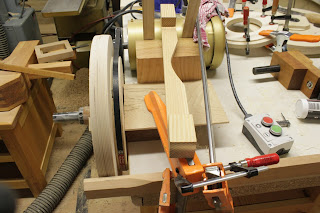 Above, I was turning the wheels. I ground two beater chisels with an ~80 degree included angle and turned it fairly slowly, but I probably had to sharpen them 30 times to finish the wheels. I also used an angle grinder with a flap disc on the (fast) spinning wheels to adjust the crown.

The setup was nicer in ways than my 'real' wood lathe, powered by that shiny new three-phase baldor. Complete with remote switch visible on the right. I thought a 2hp 3~ motor with VFD would be better than a single phase one. In any case it's an upgrade from the open frame 115v 3/4hp motor on our existing bandsaw. 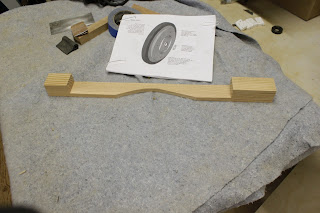 Above is the caliper I made to measure the wheels as I turned them.

Below is where I'm at currently. I've still got to mount the motor, mount the table, and build the blade guides before the saw is usable. The blade guides are lignum vitae for side-to-side movement and a ball bearing for the rear. 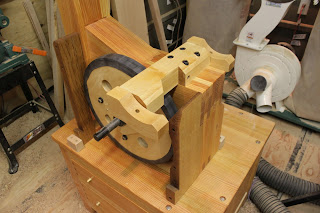 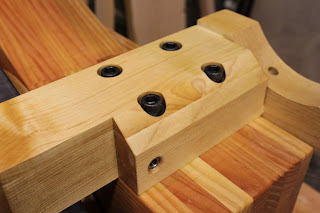 You can make out a metal taper pin on the left side of the photo below. This is how I aligned the bearing blocks before and after glue-up. The bearing blocks were turned concentric on the lathe, but that didn't make them more attractive. I was pretty liberal with the glue. 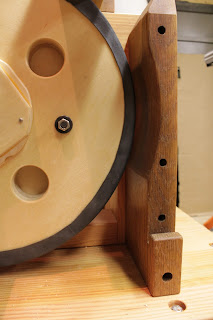 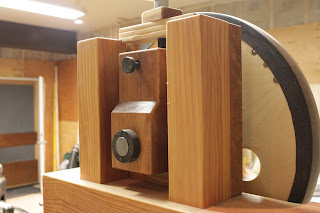 Maybe skill, probably luck: after I mounted the wheels the shaft mounts needed almost no adjustment. A single .006" aluminum shim made the wheels as planar as I can measure. Spinning the wheels forwards or backwards, the blade does not visibly deviate. The tensioner slides very smoothly with no play--wood is pretty forgiving here though. I'll wax it before taking it out on the waves. 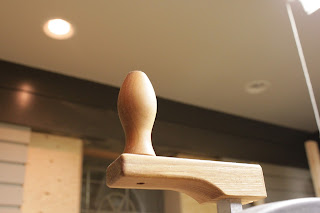 Here's the tensioning handle turned of cherry. I'll turn a prettier crank arm someday, but this works for now. I used a 1/2" T-bolt instead of a 3/8" carriage bolt for good luck, and a bronze bushing for the nut to turn on. 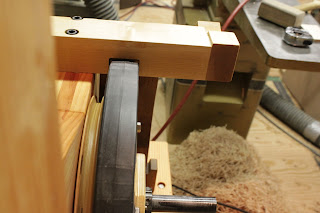 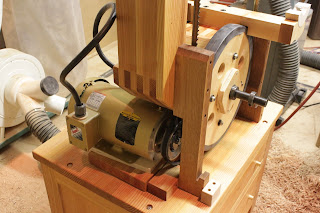 The motor will be mounted to a sliding piece, which will tension the belt with a wooden wedge.

I'll try to post more photos when it's up and running, and then again when it's "finished".
Posted by aerialcopper at 10:31 PM